The major Constellations of Skytopia are named for important figures, significant events and well known locations. While many records were lost during the Great Upheaval, many of the constellations retained their names and, as such, pre-date 0 AU.

This represents the famed Admiral Fuseli. He is present aboard the battleship Crimson Dawn, although less knowledgeable observers assume he sails on The Scarlet Blade, his more recent flagship. His blood-red scarf trails after him.

This is one of the most mysterious of the constellations. Often today it is said to represent the course a plane takes while making a barrel roll, but nearly every skyland has its own description. Another common claim is that it is an ancient constellation honoring a ‘snake people’ although the lack of historical evidence for any non-mammalian race means this description is doubtful. The source of the name Delphanus is unknown.

This constellation represents a skyland rising into the air following the Great Upheaval. After the Symbols of Magnus, and Delphanus, it is the oldest constellation still known to skytopians. Some maintain that it is a shield representing the defense of the Commonwealth during the Skytopian Civil War, although no one would be wise to claim this in the presence of a dedicated Red, Green, or Blue.

This constellation has been renamed multiple times due to shifting political power. Its original name is lost, but early skytopians re-named this constellation for the importance that Earthbreach served during the Great War and Upheaval. Despite his reverence for Magnus The Great, Admiral Svendheim renamed the constellation to Midgardica, to symbolize power moving from the Throne of Magnus (on Earthbreach) to the Commonwealth Palace at Midgard. Following the split of the Commonwealth, the three factions jointly agreed to officially restore the constellation to the pre-Svendheim name.

The Halifax is the only aircraft to have a constellation named after it. This is in respect to the role the Halifax holds as the backbone of the trading and transport industries. The two ‘wings’ on the constellation are meant to represent the broad wingspan of the aircraft.

This is one of the most recently named constellations. It represents the head and shoulders of the badger known as Lord Gilbert. Astronomers named it after him in honor of his actions during the Tortugan Upheaval.

These are the two symbols of the legendary lion Magnus The Great. It is rumored that more of this constellation was at one time visible, but it has faded since the emergence of the Skytopian Civil War and dissolution of the Commonwealth.

Containing within it one of the brightest stars in the Skytopian sky, Unobtarius represents the ominous mineral known as Unobtainium. Legend holds that in the time before the Great Upheaval, it was said to represent the much less eruptive metal of gold. Although the name is long forgotten, it is said to have been associated with commerce and long life.

Islo Major represents the head and neck of the giraffe Lawrence Islo. Even before it was named after the leader of the Azure Conclave, it was associated with ingenuity and bravery. Islo Minor is said to represent a hammer or wrench, either tool being used by Islo to create another technological advance.

This Constellation represents the head of the Guildmistress Dasha Eltsina. Some skyrates will swear by the constellation’s accuracy for navigation, but less experienced navigators can have trouble locating the somewhat undefined shape. Recently, skyrates have begun joking that this constellation does not represent the Guildmistress’ nose and ears, but actually resembles more her submarine, the Jade Whisperer. 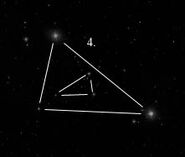 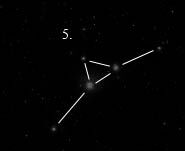 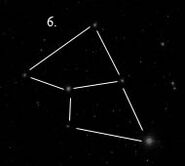 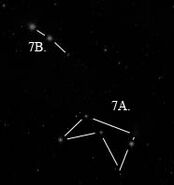 Crown (a) and Scepter (b) of Magnus