The official Skyrates manual has not been updated for some time, and is now simply no longer placed on the site. Toward the end of improving it, we're gathering some information on this page that we'd like to replace it with. If you can contribute any information please do not hesitate to add it to the appropriate section.

In this game, you'll control a privateer of the sky as you fight, trade, and explore your way to fame and fortune in a fantasy world of floating islands where zeppelins rule the skies!

These instructions will guide you through the various features in Skyrates and give you a quick overview of how to start playing the game.

In Skyrates, you trade goods and fight pirates in order to make money, upgrade your aircraft, and level-up your character. This game experiments with the concept of sporadic play, which fills the gaps in your day with short play sessions, rather than forcing you to play in one large chunk of time. Playing Skyrates should feel a little like checking your email, if checking your email were fun. Skyrates strives to create meaningful game play for busy people. Many casual games have been played sporadically, but bringing a persistent world to people with only minutes to play is a new challenge.

Skyrates is a multiplayer online game that has you taking on the role of an ace pilot trying to conquer the skies. The purchases and choices you make will affect every other player in the world, so whether you're a peaceful trader, a careful diplomat, or a bold fighter, the sky's the limit!

"Skytopia is a distant land inhabited by many animal species, some more noble than others. Hundreds of years ago, at the height of a great world war, an unknown force lifted the lands into the sky, nearly annihilating civilization in the process. Many years of darkness passed, and eventually the survivors rebuilt and revived their once great nations. Free of a single, organized government, Skytopia is now plagued by crime and piracy. It's now in your hands, noble Skyrate, to defend the skylands from these ruffians and to provide trade goods and aid to the citizens of Skytopia."

Skyrates requires Flash 9 to work correctly, which can be downloaded (for free) from http://get.adobe.com/flashplayer/ .

Skyrates seems to work best when running on Windows or Mac OS machines, under Firefox or Internet Explorer.

Additionally, due to how some networks handle cookies and connections, some places have trouble logging in and playing. If something similar happens to you, send an e-mail to beta@skyrates.net and one of the Devs will help you resolve the problem.

Use of http://skyrates.net/login-flash.php as an alternate login method may work to bypass some problems as well.

This is your Skyrates dashboard. Get friendly with it, as it'll be your long time friend in Skyrates!

Clicking on the portrait will take you to your character avatar page, where more information can be found about your character's statistics.

Clicking on the picture of your aircraft will take you to your plane page, giving information on your plane stats, upgrades, and crew.

will prompt your Skyrate to offer you some help about the page that you're currently on.

The radio button will bring up your chat, where you can talk to whatever players are currently playing Skyrates.

The logs button will display your combat logs (the battles you've fought), your trade logs (the transactions you've made), and your flight logs (where you've flown). If you have a crew, their actions will be logged here, too.

The options button will bring up information on different things you can enable/disable in Skyrates.

The show cargo tab will enable you to see what cargo you are currently carrying. 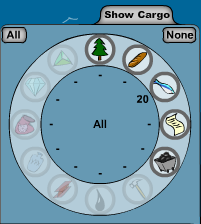 This ring displays the goods of Skyrates. The number of the inside of the circle tells you how much of that certain good you have in your cargo hold. Greyed out goods are ones you don't have the license to trade in yet.

The quick nav bar in the upper left of the screen can be used to toggle between the map view and either the travel view or the skyland view, mechanic, tavern, and trade center, depending on whether you've landed or are flying. 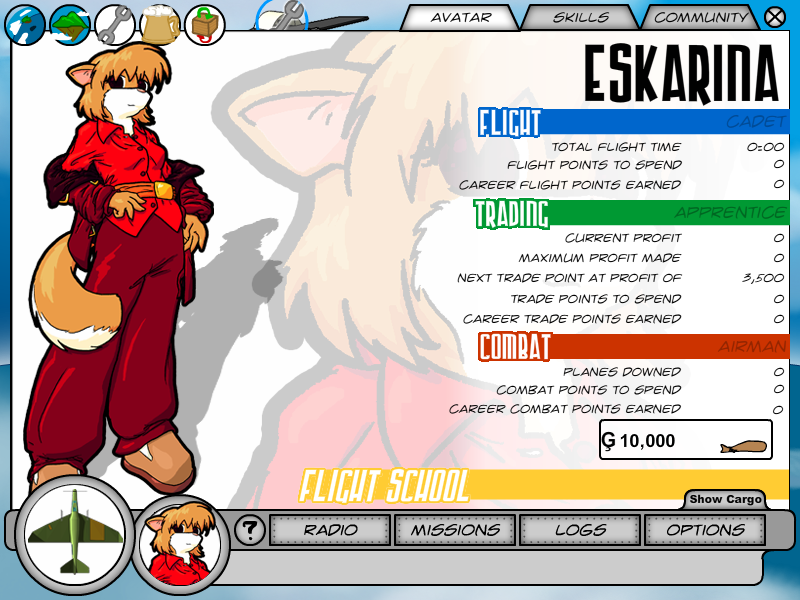 By clicking on your portrait on the dashboard, you can see your character screen. There we can see our character's picture, name, and stats. A character is defined by three key characteristics, flight, trade, and combat.

These characteristics display the major traits that define them (flight time, profit, and planes downed), and the points you've earned by doing these activities. These points can be used to purchase skills in the Skills tab.

The page displays the current faction you are in on the bottom. When you start off, you'll be in Flight School. Work your way up to one of the five Faction capitals to apply to join a Faction.

Also on this page, you'll be able to see the amount of money that you currently have. The character above has 10,000 G-squiggles, and that money pouch is looking awfully empty! 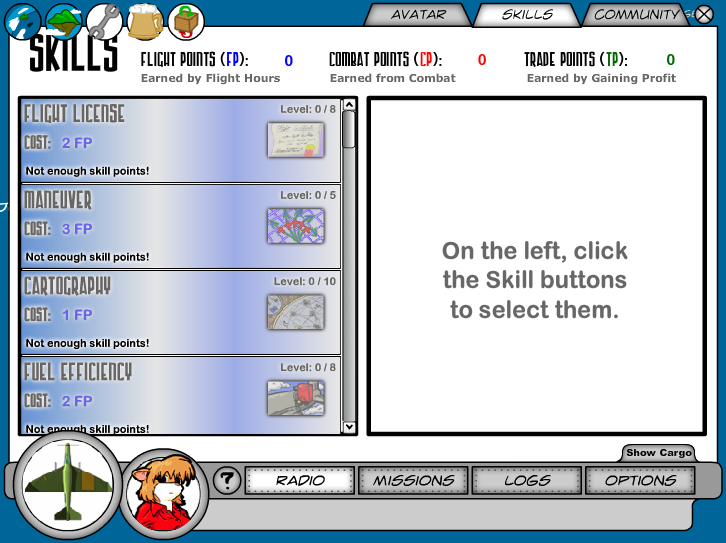 The Skills tab is where you can purchase abilities in Skyrates. The skills are divided up between combat, flight, and trade. The scroll bar can be used to navigate the skill tree.

Each skill has different ranks, or levels, which indicate how advanced you've become at that skill. This is shown as, say, "Level 1/5" or "Level 6/8". When you advance to the final level of a skill, you have mastered that skill.

When you click on a skill on the scrollbar, that skill is shown in greater detail on the right portion of the screen.

It will show you, among other things, the skills this skill depends on, and the skills this skill unlocks. (You can click on those skills to jump directly to them.) Before you can purchase a skill which is dependent on another one, the other one has to be equal or higher in level than the level you're buying.

If you meet the requirements, the

button on the right side will be available. You can click that to spend the appropriate number of flight, trade, and/or combat points and buy the next level of that skill. 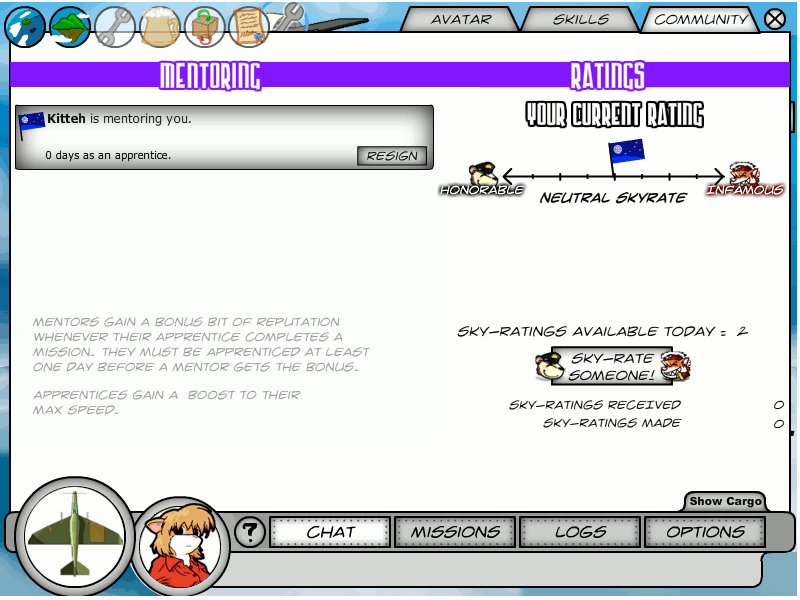 The ratings system allows for two votes per account per day, with votes having no effect beyond the rating bar. For each vote you receive, your position on the 'current rating' bar moves slightly in the relevant direction. To make a vote you click on the sky-rate button, enter the complete name of your target in the field, and then select the relevant type of vote you want. 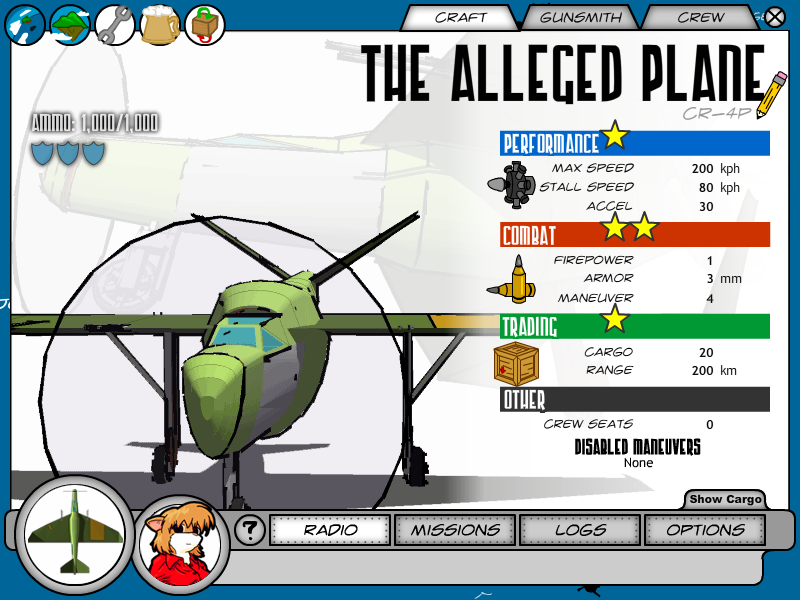 Clicking on the craft icon will bring up your aircraft page. Here, you can see your aircraft's name, picture, and its stats. A plane is defined primarily by performance, trading, and combat ability.

While you can delve into the nitty gritty of your stats, in general you can look at the star rating of your plane. Planes range from 1 to 5 stars, although it's said that some high-end planes actually surpass the 5 star rating!

Performance - The flightworthiness of the plane. It's maximum speed, minimum speed, and how quickly it can change speeds.

Trading - The cargo capacity of the plane and how far it can fly.

Combat - How hard the plane hits in combat, how much damage it can take, and how well it can avoid fire. The "Firepower" stat is only used by the Auto-Resolver to calculate the outcome of Combats that you do not manually complete. It has no impact on the relative "impact" of your plane's weaponry in manually fought combats.

Other - The number of crew this plane can house in the skies, and the maneuvers this plane cannot perform. (For details, see the Combat section.) 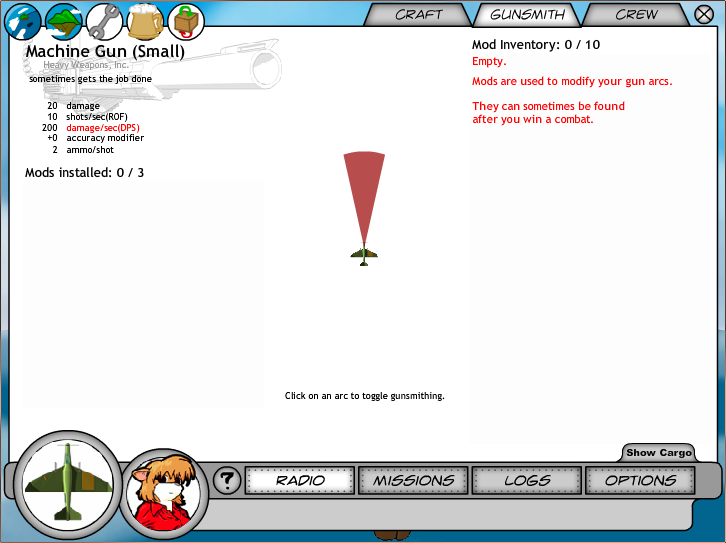 This tab is designed so you can see what gunmods your plane currently has installed. You find a gunmod randomly after combat. 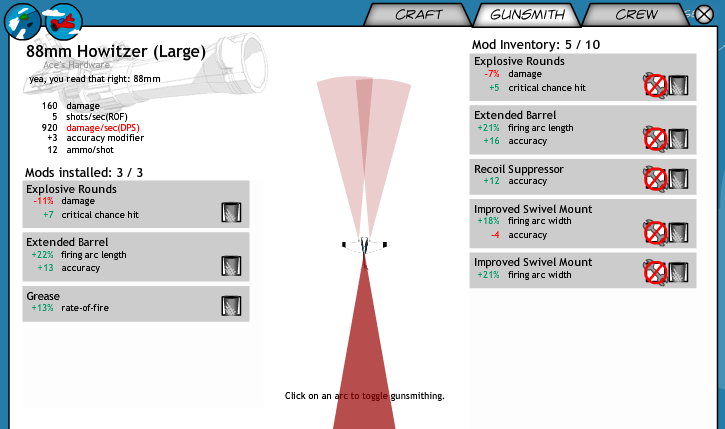 The column on the right shows gunmods you've found, but not installed. Click on one of the arcs of your plane will show the installed gunmods, and the current stats of that gun.

Red numbers mean detrimental effects, and green numbers mean beneficial effects. The gunsmithing system can be used to turn your guns into the death-dealing weapons you know that they can be, but just remember that using explosive rounds will reduce your basic damage!

You can only install three gunmods per gun. You cannot retrieve gunmods after they've been installed, but you can destroy them. You can only hold ten not-installed-yet gunmods at a time. 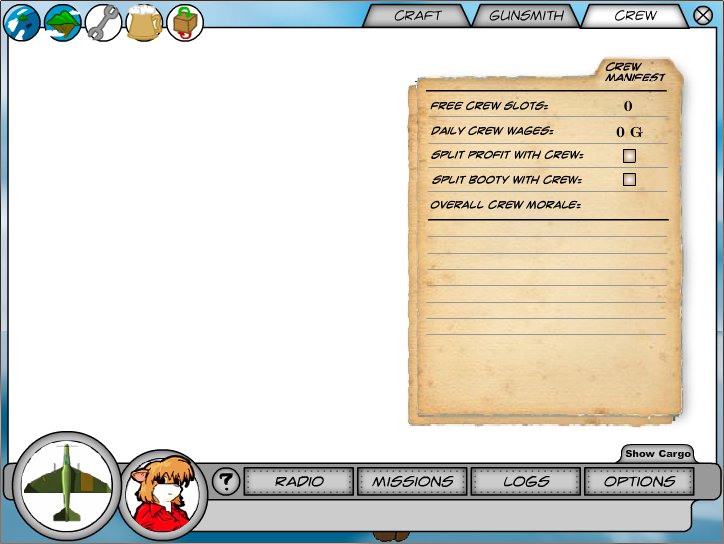 The crew page is designed so you can see the levels and happiness of your crew at a glance.

Your hired crew are shown on the left side of the screen, and your crew manifest on the right. 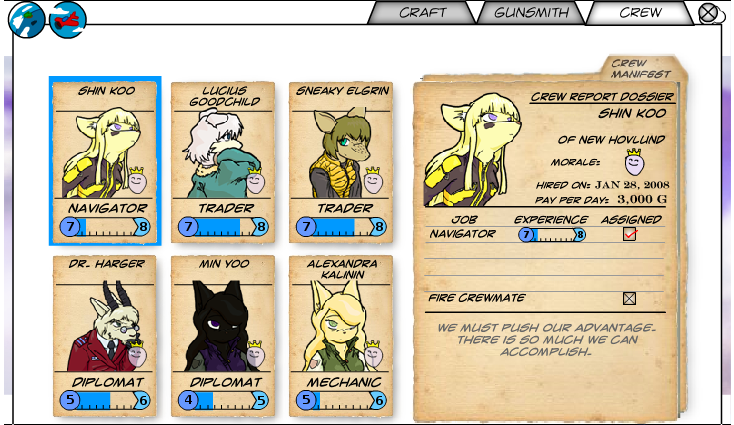 Your crew manifest will tell you how many more crew you can hire, the amount of money you're paying your crew every day, whether you're splitting trade profit or combat bounty with them (which will make them happier!), and their overall happiness.

Your hired crew are shown on the left side. Their name, picture, happiness, profession, current level, and progress to next level are shown. You can click on a crew member to see further details about them on the right side of the screen. (You can click on them again or click the "Crew Manifest" tab to see the manifest again.)

Your crew are your family in the skies. Take care of them, and they'll take care of you. 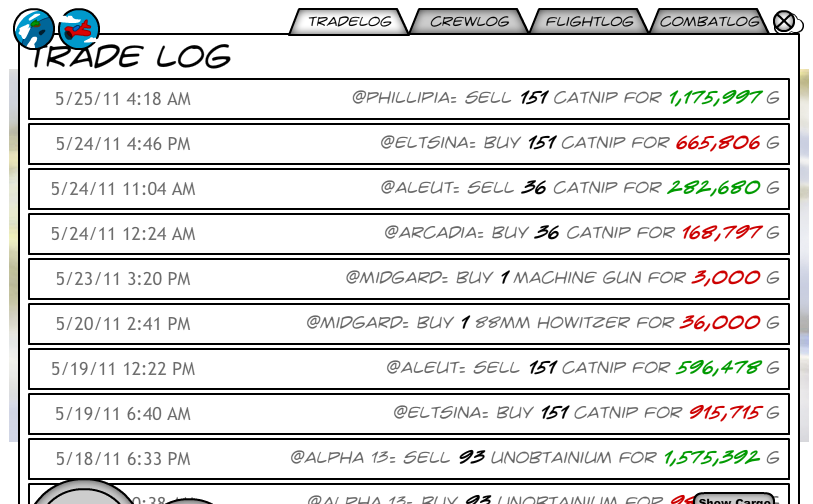 Clicking on the Logs button will bring up a page with a list of the last 10 recorded events in each category.
Trade logs will record every purchase and sale you have made along with the time, place of transaction and total cost/price. Purchasing or selling Guns, Planes or Upgrades will also show up here.
Crew logs will show the significant actions of your crew. The log also records when and how much you have paid the crew's wages, split profit/booty with them, or if they have been wounded in a combat.
Flight logs simply show when and where you have landed or taken off.
Combat logs tell you the time, outcome, payout and Combat Level of recent combats. If the Autoresolver wins a combat, it may award a single Combat Point, in which case the message "+point" will appear in the log in red ink.

Occasionally, you will see small popups on your character's portrait. This can range from "Trade Points Earned!" to "Honor!" to "Found gunmod!". They're just information about small things that recently happened, and will disappear by themselves.