The Skybrary
Register
Don't have an account?
Sign In
Advertisement
in: Citizens, Citizens of the Court of Violets, Canon Characters

Shining One is one of three representatives from the Court of Violets (the other two representatives are Treader of Air, a male wolf, and Great Reflection, a female bear.[1][2]). Shining One, also known as First of the Court, the Incarnation of Art, the Icon, and the Grand Artist,[3] has appeared only in a bullet-pocked mask which hides the face and in a costume that makes identifying species, gender and age impossible.

13 crafts are used by Shining One, Treader of Air, Great Reflection and 30 others whose identities are unknown. They appear to be 2 Spectres flanked and divided by a line of 4 Ingersolls, 3 Novas, 2 Havocs, 2 Marauders in a reflective pattern. Shining One's personal transport appears to be an Ingersoll.[1]

The blurring glow is caused by a specially treated form of glimmerclay.[4]

As Shining One is androgynous, the pronoun for Shining One alternates between masculine and feminine (e.g., Shining One nods, and strides from the meeting place, his two companions following close behind her.).[1] There has been no indication of specific gender-neutral pronouns, possibly as a convenience to those who don't know them and/or find them annoying. 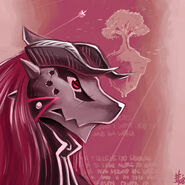