Seems like some stuff like "AR/autoresolve" don't pop up on a search-was gonna make a redirect for "AR" to "Autoresolve," but apparently we don't HAVE an AR page? This's the stuff noobs are going to be looking for, they need to be able to find it. I was going to make redirects for common abbreviations (AR/CI/ect) but if this is the only place they're mentioned, we need some way to direct people here from he search. Ideas? I'm hesitant to make 50 redirects for every word mentioned in this article. Also, is there some formal way to make a suggestion around here? Adding talk to a random page and hoping someone sees it doesn't make me confident in my exposure.Athena "Kitteh" Sterling 00:35, 15 January 2009 (UTC)

As I mentioned over on the main Skyrates Forum, I'd suggest making the redirects. As for leaving suggestions, the Talk/Discussion pages are a great way to do that. At least when you're making comments regarding a specific page. A few of the Skybrary Staff here peruse the Special:RecentChanges list daily. If you make a post, we'll see it. If you want a more general spot, however, some folks have used The Skybrary:Community Portal. --Calvin November t/c on 03:24, 15 January 2009 (UTC)

The "Are there any hotkeys for the maneuvers?" hotkeys are a bit off I believe. Loop is 6, not 7, and left/right selections for barrel roll and sideslip have been removed. Furthermore, it might be good to put in the SHIFT+<3 directional> hotkeys either in this section, or a link to a page with that info. I know I use those a lot more than the number hotkeys.--Jeriah Mercadia 15:47, 30 March 2009 (UTC)

It doesn't really fit within the "Are there any hotkeys for the maneuvers?" section, but the image you seek is probably the one below. --Calvin November t/c on 00:30, 31 March 2009 (UTC) 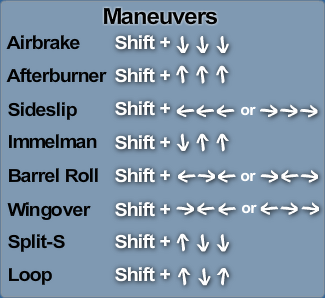