The Skybrary
Register
Don't have an account?
Sign In
Advertisement
in: Citizens of the Court of Violets, Citizens 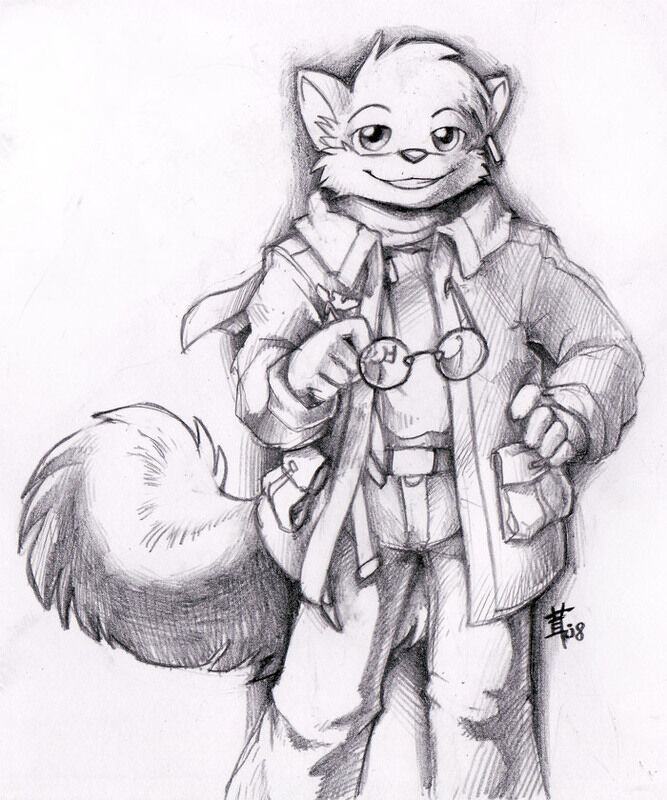 Bouchie is a rather young brown squirrel in his early twenties. A proud and noble gentleman, Bouchie may appear at first to be a bit distant. This quiet attitude allows him to better listen to others, react to their tales and fill their needs as he feels them. Bouchie is actually a sensitive squirrel, even though he will, most of the time, force himself to project a strong image. He actually loves company and will most likely warmly welcome anyone who wishes to have a chat.

He is most often seen wearing the Republic's Officials flight uniform; a kahki green military flight jacket decorated with the Emerald Republic's symbol insigna and other achievements badges to denote his rank, assorted with darker green pants, an orange scarf for contrast and well-cared black army boots. His left ear is also pierced with a silver earring, a memento of a somewhat rebellious youth.

Born on Midgard, Bouchie is actually the oldest of a small and humble merchant squirrel familly. When he turned old enough to handle business, he was forced to help his father and work as a travelling salesman to help the familly business. As he learned the ropes of trade, he grew more and more discontent of the ways policies were enforced within the Guild of Merchants. Even though he was still a teenager at the time, he was particularly discontent of the way things turned out during the Tortugan Upheaval.

Even though he was and still is a strong believer in democracy, he also thinks the people need a direction in which to focus their ideas. When Kenisu Ichojari officially split the newly founded Emerald Republic from the Guild of Merchants, he knew it was what he had wanted, what he was looking up to. As soon as he came of age to enroll, Bouchie left his family behind to sign up as an infantry for the military of the Republic. His family did not approve such a decision and, after a very violent argument with his father, he was disowned. His military career was a success, however, as he was quickly noticed by his superiors, and eventually Kenisu himself, for his enthusiasm and his dedicated work. Kenisu's favor allowed him to quickly rise through the ranks.

President Kenisu's hasty and unexpected retirement from his office let the Republic fall in a great time of crisis. Without any structure to support the mostly vacant executive offices and Flight School still in a large effort of expansion, taking away Skylands from Green, one by one, the Republic was bound to collapse. Fearing for the future of his nation, Bouchie decided to act and take the reigns of influence leadership. He designed and established tools of communication which were to be the basis and structure of what is the Department of Defense today. His efforts has been efficient and he was able to salvage what was left of the Republic at the time.

When elections finally came, he as able to achieve a tie against his opponent Diver Dan whom he, at the time, was seen as his rival. Diver Dan's ideas of reform and improvements over Bouchie's emergency measures were popular within the citizens of the Republic and was thus able to gain as much visibility as Bouchie. The outcome of this election has not conducted to another poll, however. Both men agreed that it would be for the best interest of the Republic and its people if they united their forces and ideas to direct its armed forces.

The following elections saw Diver Dan run for Vice-President office, leaving Bouchie to face Athrawes in the race to leadership of the Republic's organised forces. Bouchie's victory was almost absolute, but the squirrel didn't feel confident enough to do everything by himself, so he offered his opponent to fill in Dan's former role and help him direct IRs.

However, at mid-term, Bouchie felt he needed to distance himself from the influence war to better and more actively participate to the Republic's democracy. It is as a citizen that Bouchie would influence his factionmates and oppose the decisions he considered to be against his own ideal of the goal the Republic should have.

Thus, it is as a citizen that the squirrel would see his once beloved Republic turning once again towards the crafty ways of the Merchant Guild. Months of opposition to propositions of treachery and the ever-growing obviousnes of Athrawes' incompetence as a leader of Influence Runners fueled his frustration at his inability to make most other members of the Hand agree with his ideas. It is this frustration, combined with those of the Hand's very best IRs, that led to the creation of the Viridescent Claw, a group which rejected the governance of the elected officials and felt that Green should be led their way. They were no Repulicans no more, nor were they Guildsmen. They were greens dedicated to the maintenance of Green's holdings throughout the world.

As Secretary of Defense, Bouchie came into contact with representants of the Court of Violets, of which he became fascinated. Their views on harmony and perfection were very close to his, but he was unable to formulate them properly.

Ever since their first contact, Bouchie has been reflecting and further developping his own vision of global peace and after retiring for many years following the first Skytopian Olympics, the squirrel finally concluded that it would be the best for himself to improve himself physically and mentally, to seek this perfection so dear to the Court of Violets.

Bouchie has been flying Purple ever since.

All in all, Bouchie is a proud squirrel with a strong sense of duty, cheerful and caring for those he appreciate and love. Usually calm, he tries to always keep his head cool, so he can more carefully chose how to act or react. He knows when it is time to act rather than think. Bouchie is courteous, especially to women and his gentleman manners and honest speech earned him the trust of many within the Republic, and even beyond its borders. Friendship is priceless to him, so much he would not even hesitate to risk his own life to save a friend in danger. A most pleasant company, for sure, if you can catch him at the tavern.

Bouchie has strong interests in poetry and philosophy. He is also very involved in the communities he is part of.

Bouchie hasn't shown much originality in the choice of planes he flew so far. Prefering a certain and fast profit to fancy wings, it would allow him to easier and faster afford a plane best suited to efficiently enter the influence game.

Here is his progress.

Nicknamed "Smoothie" by Bouchie, Smooth Dozen is a lemur of a very quiet nature. When he's not flying, he spends most of his time sleeping in his hammock at Bouchie's reserved hangar. This does not mean, however, that Smoothie is lazy; it is, in fact, quite the contrary. When he's not observing wind currents to optimize the plane's speed and adjusting trajectory accordingly to reach destination as fast as possible, Smoothie is always fiddling near the engines, doing minor and major maintenance works both on ground and in flight, to make sure everything always runs smoothly.

Smoothie has been flying alongside Bouchie for years now and what were once strong professional bounds have evolved into a particular, yet precious friendship, not unlike brotherhood.

Many other crewmates have joined and left Bouchie's service. Here is his current crew line-up.

Efficient mechanical whizz, Abe has joined Bouchie's service only a few weeks ago. He seems to appreciate the company.

Hope is a young student, majoring in world economy dynamics within the Superior Economy department of the Academy of Flight. She is working as a trader to pay off her student debts. She is secretly annoyed that Derringer tries to drag her in his businesses, since she actually wants to work as a stock analyst.

Derr is an old merchant who shares his experience of the markets with those willing to pay for it. He is particularly fond of Hope, whom he sees as his business successor.