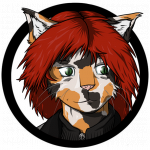 Herley is defined by a strong sense of duty and a willingness to learn and try new things. Though this can make her seem like a hyperactive bundle of fuzz, she's actually very mellow. She's happiest when she has time to relax and just let things go, but she's equally at home in a large crowd or romping around town with her friends. She is a bit distractable, as her natural feline curiosity sometimes gets the best of her, but she can quickly rein herself in. Herley relies most on logic with a hint of intuition.

Herley allows herself a few vices: She truly enjoys both varieties of 'nip (mell and cat), and a well-made alcoholic drink is always a fine end to any night. She rarely, if ever, gets drunk, and though she does use 'nip, it's always in small, controlled doses. She loves a good story or song, and can frequently be heard humming snatches of traditional Steppian songs to herself as she works.

Herley possesses some rather surprising skills. From a young age, she was close to obsessed with flying. At the age of ten, she began saving money for tuition at Flight School; by the time of her enrollment, she had nearly enough money to pay for the traditional three years of education. She quickly proved to be a skilled dogfighter, and was recruited by the Crimson Armada soon after graduation.

Herley is also a passable sniper and counter-espionage agent due to training received from Markus Jarnhann. She excels at pistol use, and is a frequent patron of the firing range on the R&P Skylet. Knife use is far from her specialty, but she can handle herself well enough in a fight despite her small size.

A lean calico cat, Herley stands at 5'4" and weighs 110 pounds. Her everyday wear is a 3/4 length light gray canvas duster with light metal inserts, for protection against environmental shrapnel and knife blades. It provides limited protection against bullets. She wears a variety of tops, usually choosing a cream-colored cotton blouse in warm weather and a black long-sleeve turtleneck in cold weather. She doesn't often wear skirts, usually defaulting to a well-worn pair of naturally sandblasted khaki cargo pants. More often than not, she will wear her battered and abused leather flight boots.

Frequent accessories include a pair of sandblasted and chipped flight goggles that are all but useless as anything but a memento or a worn black-and-gray-checked kheffiyeh.

Notable cold weather gear is a piece of fleece with drawstrings and such that allow it to function as a balaclava, scarf, hood, or various other head coverings.

Recently, Herley has taken to wearing her hair long. It reaches to her mid-back when loose, though she does have a newfound fondness for intricate braids.

Herley has a variety of weapons. After her return from the Barrens, she only carries a Colt M1911A1 in a hip rig with spare ammunition, a spray of throwing knives, and a well-honed fighting knife.

Her personal collection of firearms - kept secured in a gun locker to which she has the only key - includes a Glisenti Model 1910, a Makarov PM/M, a M1 Garand, and an Enfield L42A1 military sniper rifle modified for semi-automatic fire and fitted with a silencer.

As a near full-time resident of the R&P Skylet for much of her career, Herley has a great many friends and acquaintances.

Of note is her husband Richard Cussler, though she was previously married to Artemus Delphus and Maya Muldrake.

Markus Jarnhann was her mentor and direct superior for much of her service time in the Crimson Armada.

Born in November of 201 AU to Erland and Jani Danika, Herley's early life was centered around flying machines of all types. Her mother and father, both Flight Control Officers on Steppe, were ecstatic when Herley's first word was "plane." In retrospect, this isn't surprising, since Jani worked at the airfield until shortly before Herley's birth.

After Herley's birth, she would often be brought to the control tower while her parents worked. She would watch the various craft land and take off for hours. By the age of 10, she could identify by sight the most common planes in Skytopia.

When she turned 15, Herley enrolled in Flight School to escape unwanted attentions from certain tomcats on Steppe. She spent three years on Echo, during which she went through a rather rocky string of relationships. This culminated in her near death at the hands of one Dimitri Mendeleyev. She retreated into a shell for the remainder of her time on Echo, graduating in the top 20 of the class of 219 AU. She stepped into her CR-4P, took off for home, and began her life roaming the skies.

Herley spent 3 years in the Crimson Armada after leaving Flight School, working directly for Field Marshal Markus Jarnhann. She joined the Armada to honor her retired uncle's legacy, and never regretted her decision..until she left in early 222 due to irreconcilable differences with the philosophy of the Armada as a whole. Despite this, she does receive a modest pension based upon her advancement to Commander and the time she spent as an operative in the Grinning Rogers. She also receives some income in return for allowing the Armada to utilize her designs for a close air support and transport craft.

Having had a rather rocky experience with various tomcats (don't ask her about it), it wasn't until after Herley joined the Grinning Rogers and had a good, long talk with Nesseun that she began considering finding another tomcat. She quickly found Artemus Delphus, and surprising both felines, they soon fell in love and began dating. Given the Hidden War and Herley's rather risky occupation, they moved quite a bit faster than anyone expected, and proposed to each other in early 220.

Herley recognized in early 221 that she and Artemus took things quite a bit too quickly, and after talking to Artemus, the two decided to have an extra-long engagement to mitigate the swiftness of their previous actions. Despite that, and due to events surrounding the Hidden War, she married Artemus on Christmas Day of that year...as well as Maya Muldrake. Both women appended "-Delphus" to their surnames.

After leaving the Armada shortly after the resolution of the Hidden War in early 222 due to a number of philosophical differences - namely, the Armada asserting control over factional capitals within weeks of the end of the war - Herley worked as a gun-for-hire. Or, to put it more politely, as a 'troubleshooter'. That is, if there was trouble, she shot it. Various things happened during this time period, culminating in her trip to the Barrens aboard the Vastille near the end of 222...and subsequent disappearance into the sandy wastes until just days before New Year's Eve of 223.

She was a much-changed woman - a combination of sickness and isolation left her with a mixture of solid reality and half-coherent fever dreams as her memories. She arrived on the R&P Skylet as a dirty, sand- and dirt-encrusted drifter wearing layers of cast off clothing topped by a long, muted red flight jacket that was nearly transparent in places, a faded black-and-grey-checked kheffiyeh, and a pair of chipped flight goggles.

She was taken in by Richard Cussler, who patiently led Herley back to herself, though a calmer, more introspective version. In a cliched attempt to avoid being a cliche, she seized on her - unbeknownst to her, now nullified - marriage to Maya Muldrake and attempted to rekindle a passion that never was. Rebuffed, gently, she remembered that it was Artemus Delphus to whom she was married...then recalled that he was almost certifiably insane as of the last time she'd seen him. For some reason, she assumed that he was likely in an institution or dead, which freed her to begin a relationship with Richard Cussler - after a short time of living alone in the year-unused suite above the tavern she'd shared with Artemus and Maya.

In the new year of 224 AU, she and Richard grow closer - the wolf has moved some of his belongings into her new apartment (located just across the park from the tavern) and they spend a great deal of time with each other. Shortly after, Herley aided Richard in rescuing a kitten named Paolo from a crashed airship. Though the kitten was slow to warm to them after his orphaning in the crash and a great deal of language barriers to overcome, Paolo eventually accepted the caring couple.

Richard proposed to Herley on February 14th and the made plans for a wedding in early fall. Upon Herley's next heat shortly after the proposal, she and Richard took in Vale Biggeri as their shared paramour. The three adults and one kitten moved from the apartment on the RnP Skylet to a villa on Steppe in April, and took up residence there alongside Martin and Rose Guerrier, the elderly former owners.

Herley became pregnant with Richard's child - or perhaps children - on May 10th, and is expected to deliver sometime between February 10th and 14th. Richard and Herley were married in an open though sparsely attended ceremony in the park on the RnP Skylet on September 7th.

Retrieved from "https://skyrates.fandom.com/wiki/User:Herley?oldid=25794"
Community content is available under CC-BY-SA unless otherwise noted.