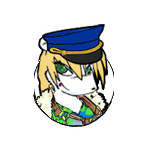 Right, enough of this.  It's time for updates!

Born early in the month of Tortugatition on the Forrester Farm on one of the collected chunks of land mass that makes up Steppe, no one really had any idea what direction little Natalie's life would ultimately wind up taking her, least of all Natalie herself.  Thankfully, she didn't have to worry about taking over the Forrester Farm; she had an older brother (Mike Forrester), that would almost certainly be the one taking over the farm, instead.  Instead, Natalie almost always had her gaze up in the skies, especially as aircraft was the only real means of travel from one skyland to another.

While she clearly wasn't setting herself up for just a continued prolonged, drearly existance as just another "farm girl", she was starting to get fairly handy with mechanical stuff, which would end up actually playing a major role in just how exactly she winds up finally figuring out just what she's going to do with most of the rest of her adult life.

To be honest, the moment Natalie was born, Mike (having just turned three, himself) really started to feel that shift in attention start to drift away from himself to his new younger sister.  This would end up being another unknown strike against her own reputation in her older brother's eyes.  Of course, as the two siblings aged, so did their underlying resentment of one another, though it was Mike that expressed this to Nat far more than the other way around.  This continued until Nat was just starting out as a freshman in high school, and ran across a shy, stuttering fox by the name of Kyrien Luciano.

At first, Nat pitied Kyrien more than anything else.  However, after a while, Nat started to notice that Ky spent a lot of his time actually getting picked on, and Nat just wouldn't stand for that.  As Nat continued to progress through her education, she also started spending more and more time around the fox, always standing up for him (mostly due to his own inability to really stand up for himself).  After a while, she started to treat Ky as the younger brother she wished she had, rather than the older brother she did have that turned out to be the greatest colossal jerk that Skytopia would have had to suffer and endure.  Of course, things changed once Nat hit her Sweet Sixteen.

Nat's Sweet Sixteen wasn't like most girls' Sweet Sixteen.  While most girls got a new pair of shoes, or even a little tiara, Roger felt instead that his "little" girl was finally old enough to have her first beer.

This ends up being a huge mistake.

Rather than quench what Roger thought would just be a "driving curiousity" for the Forrester daughter instead became half the reason she ever even took risks in the first place.  In fact, it didn't take long for the still-underaged Forrester daughter to start frequenting the local tavern that was fairly close to where the airstrip and trade depot was on Steppe and started just running up a tab.  At first, this just started with Nat drinking her own father "under the table", but once she started visiting the tavern, simple grog just wasn't good enough any longer, and she started escalating up the alcohol chart.  Eventually, though, Nat found the one brand of alcohol that was finally strong enough to start putting the hyper-metabolic ferret back in her place: Uurwerkian Blue.  After a while, said tavern decided to use Nat in a "friendly competition".  A sign was placed up over the bar itself that read:

To this day, not a single soul has won that wager.  Then, once Nat had turned 22, she found something grand, that desperately needed her knack with machinery; on a neighboring farm was the wreckage of a CR-4N.  This, this was Nat's ticket to no longer being a simple "farm girl".  By this point in time, Mike was 25 and Kyrien was just 13.  She started taking apart the wreckage of the CR-4N and hauling them over to the Forrester Farm, and borrowing tools from the hangar at the airstrip, started working on the CR-4N over the next year trying to get it to functionally fly once again... when she wasn't busy trying to get herself completely wasted at the local tavern as usual.

By the time Nat's "borrowed" CR-4N was presumably capable of flight once again, she had been out of school for about five years.  Mike was 26 (and going steady with another ferret by the name of Natalya), Kyrien was 14 (and advanced enough that he had also just graduated from grade school).  Finally, Nat had a plane that was all her own... and not a clue how to fly it.  Thankfully, it wasn't all that far from Steppe to Echo, so, after slugging down another full five glasses of Blue, she staggered over to Kyrien, and suggested the following:

Despite Kyrien's protests (especially the two largest, ), Nat eventually convinces Kyrien that this would be a much better alternative to taking the standard public transportation to Echo and attend Flight School that way.  Besides, Nat was probably going to need assistance to make it all the way to Echo from Steppe (as well as find her CR-4N again from each pit stop at a connecting Skyland).

Retrieved from "https://skyrates.fandom.com/wiki/User:Natalie_Forrester?oldid=25888"
Community content is available under CC-BY-SA unless otherwise noted.