The Skybrary
Register
Don't have an account?
Sign In
Advertisement
in: Citizens of the Crimson Armada, Citizens 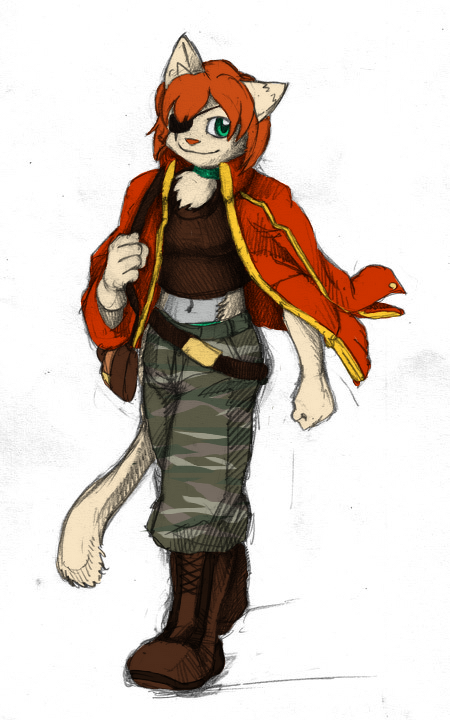 Standing at 5'3" and weighing a clean 130 lbs gives her the toned physique one would expect from a trained military officer. She carries herself with the pride of one of the most prolific and successful fighter pilots in the skies, though - unlike many other cats - she does not exhibit the superiority complex that many would expect from a feline.

She is most commonly seen wearing a slightly oversized red flight uniform identifying her as belonging to the Crimson Armada. Heavy black leather boots, a patch over her right eye and a simple shirt underneath her uniform jacket complete her outfit. Her fur is off-white, nearly cream in color and her hair is red, and always worn in that messy, I-don't-give-a-damn look.

Sadistica Krijgsman, Sadi to friends, was born on Tehras, into a small farming family. Her childhood was one of little interest. Growing up on her family's lands, being homeschooled, she didn't really have much contact with other people until she grew a bit older and started venturing further from home, whether her parents wanted her to or not. Even when she was young she always wanted to fly, hearing the stories from her father, who used to be quite the skyrate himself, or so he always said.

Her mother left them when she was in her teens, to elope with the carpenter. Sadi and her father were left to fend for themselves, Sadi's upbringing in her father's hands. This was something that he proved reasonably capable of, however. He instructed her in the ways of the pilot, letting her train on his old CR-4P, which she crashed only twice.

After leaving her home to try her own luck in the skies, she started out as a simple trader though in time made a name for herself as one of the most noteworthy combat pilots in Skytopia. Her tactics are often unorthodox, though no less deadly for it. She joined Red Faction and quickly rose through the tiers, eventually flying a doublekitted Bismarck, the frigate 'Freedom'.

Even in her young life, she has experienced the best and the worst that life has to offer. Experiences that have shaped her, from a carefree bundle of energy to a more reserved, quieter one. For her, it's not the years, but the mileage that has done the most damage. A fight gone wrong left her with her a scar where once her right eye sat.

When the big storm hit, Sadi was one of the many pilots who lost their plane. The Freedom was destroyed when it collided in mid-air with a heavily modified pirate Leviathan, while she was attempting rescue and support operations. She lost several crewmembers during this event, including her close and personal friend, Dirty Dozen, known simply as DD.

The storm taught her a few things though, not the least of which that there are people who would take any opportunity to do harm upon others. This realisation has helped her become more driven in the pursuit of safety and security for all skytopians, and eventually led to her entry into politics. A discipline in which she has also quickly made a mark with her tireless campaigning for security and safety and the general support of the Crimson Armada ideals, most notably around the Grottopolis region.

Sadistica's personality is inherently innocent and generally cheerful, though time, experience and marriage have mellowed her down and granted her a measure of wisdom unexpected from someone with such an innocent smile. She is sometimes affected by moodswings, and is known to have trouble seeing the bigger picture. She means well though, and genuinely just wants to be loved. She is generally approachable and friendly, and always has a listening ear to offer to those who need one. Having found love in the arms of Jennifer McKinney, radio operator onboard Marcus Cunningham's mighty ship, the Iron Vulture, she seems to have finally found her niche.

Sadistica and Jennifer currently have two children. A bunny boy named Marcus, and a feline girl named DD - named after two very influential and close friends of the happy couple.

(To be updated soon)

Abigale (Gale to friends, Mistress to real good friends) is a highly confident, seductive personality. She loves raising eyebrows and will take almost any opportunity to do just that. She suffers from the same bundle-of-energy syndrome that also affects Sadi, and her generally cheerful disposition makes her fit in with the rest of the crew just fine. But between the three of them, Gale is the most serious and the most mentally balanced. Even though she's a raging lesbian, and a Domme at that.